Vaping and Students: Enterprise Security Needs to Lead the Charge 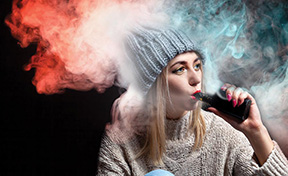 For years, manufacturers have been finding ways to make products more appealing to kids, either by design or through the senses (i.e. smell, taste). We have cough syrup that tastes like cherries, vitamins that look like Fred Flintstone…the list is long.

Therefore, it makes perfect sense that we now have odors that smell like cool mint or mango wafting from the high school and middle school bathrooms – that last bastion of privacy for students to enjoy the vape of the day. A 2017 National Youth Tobacco Survey found that 11.7 percent of high school students and 3.3 percent of middle school students used e-cigarettes. And in many instances, the restrooms in America’s high schools and middle schools, where by law, video surveillance cameras are not allowed, has become ground zero for this growing epidemic.

The National Education Association estimates that up to three million students are using vaping products, which not only smell and taste good, but also look like a really cool computer flash drive that can be charged in a USB port, with each cartridge containing roughly the same amount of highly-addictive nicotine as 20 cigarettes.

So, how do you monitor something in an area where surveillance cameras are not permitted? Unfortunately, this is where some schools have inadvertently blurred the line between security and invasion of privacy. Recently, an Alabama principal made headlines after he ordered the removal of the doors in several of his school’s bathroom stalls. In that Alabama case, the doors were put back in one week later after parents issued concerns about their children’s privacy.

Many security companies and manufacturers are now working with school security teams throughout the country to make detection devices available to schools. As non-video devices, these vaping sensors can be installed in bathrooms where they will detect vapor from electronic cigarettes in real time, including the detection of THC oil, a chemical found in both e-cigarettes and marijuana. Still, detection is only as useful as the ability to monitor that detection.

According to Tom Reilly, vice president of Security Supply, with locations in Massachusetts, Connecticut and Rhode Island, the technology is a perfect opportunity for security to migitate this issue. “Advancements in technology have given security companies the ability to integrate vape detectors, so that alerts for any infractions can be sent in real time to an appropriate parties’ phone and emails,” says Reilly. “It can also be integrated into a school’s video and security systems. In addition, the technology exists to integrate with cameras outside the restrooms, to monitor who enters and leaves correspondent to when the infractions occur. This means that if Billy walks out of the bathroom minutes after the vaping detector signals a time-stamped message to the principal’s email, you can be pretty sure that he was doing something he wasn’t supposed to be doing.”

Reilly adds that integration can be set up to pinpoint where the infraction occurs, so alerts are sent to a teacher on the 2nd floor if there is an infraction in the 2nd floor bathroom. “Some of the detectors that are now on the market utilize POE, saving time and labor on the installation side,” he adds.

There’s no denying that schools are embracing this technology as the ill-effects of vaping become more and more prominent in the news. And that’s without factoring in that along with the obvious health risks, vaping has also caused additional problems as e-cigarettes are being flushed down toilets, resulting in schools having to dole out thousands of dollars in custodial and plumbing fees.

The opportunities are there for school security officials, in addition to enterprise security as a whole, to jump on what is not so much a bandwagon as it is a runaway train. More and more schools are investing heavily in vape detectors, with reports of one Ohio school district spending more than $60,000 to put vape detectors in their bathrooms. It only makes sense that vaping issues will spill into corporate America, if it has not done so already. Now is the time to come up to speed on these types of solutions and let your workforce – and leadership – know all that you are doing to help mitigate this issue.